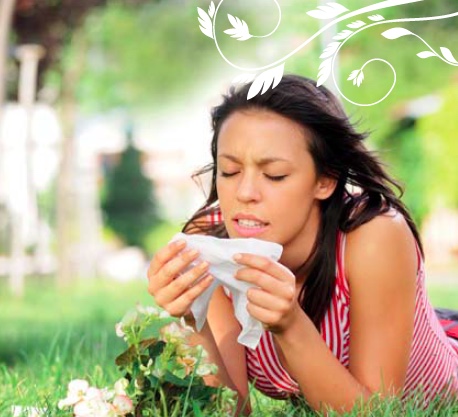 If it is summer, it is the allergy season. When the pollen level counts rise each year this fact

is well appreciated ,by all those who sneeze, itch, suffer from shortness of breath or try to perform their everyday duties drowsily because of the antihistamines they take for their allergy.

We have previously mentioned, that research has reported very promising anti-allergic effects of several active ingredients. Now we have collected these natural solutions together for you and can guarantee they will prevent you from sneezing.

Vitamin C is so versatile and it plays such a crucial role in our immune system that it is the natural choice for the allergy season.

Several studies support the belief that the levels of histamine in the body and vitamin C intake are related. Histamine is the intermediary substance that causes the capillaries to dilate, the skin to turn red, the lungs to swell and those suffering from asthma to choke. A study completed with hundreds of participants also described that they found a reciprocal relationship between the levels of histamine and vitamin C; therefore, the higher the vitamin C intake was, the lower the histamine levels were found to be. The latter  being responsible for the development of allergic reactions.

The same study examined how those with lower histamine levels reacted to a few days vitamin C treatment of 1,000 mg daily. The result is promising for allergic patients as high dosage vitamin C significantly decreased the level of the allergising substance in the blood, thus reducing the chances of developing allergic reactions.

Another piece of good news for asthma patients is that a major study has proven that a low vitamin C intake is related to asthmatic attacks!

Through the rediscovery and in-depth examinations of vitamin D, it has also been proven that its deficiency can play a role in the development of allergy. According to a recent study, the lack of vitamin D increases the chances of allergic reactions caused by pollens, and thus the development of asthmatic symptoms. This suggests you can help yourself a lot with proper vitamin D supply in summer too. Don’t forget that vitamin D deficiency is also quite common in the summer months, contrary to previous assumptions, so its supplementation is a must, and not only for allergic patients.

If you suffer from allergy, you know for sure that the intake of calcium can prevent or reduce the swelling of the mucous membranes (running nose, sneezing, itching eyes) or the blushing of the skin. The reason for this is that calcium is capable of decreasing the through put of the capillaries so the swelling of the surrounding tissues will be milder.

Allergies embitter the life of more and more people. Some theories say this is caused by increasing environmental pollution as we are exposed to more and more chemicals and allergenic substances from the moment we are born. You can also support your fight against allergens with a properly strengthened immune system, using natural active ingredients and vitamins and without the drowsing effect of medicines.