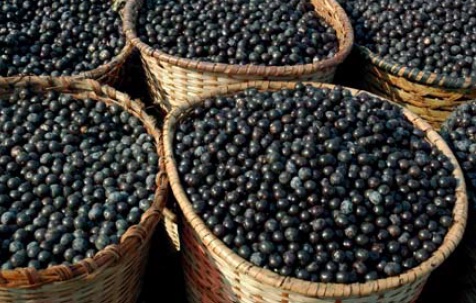 The origin and botanical characteristics of the berry Acai (Euterpe oleracea, Mart.)

Acai (Euterpe oleracea, Mart.) Is a Brazilian berry from the Amazon basin. It grows in Central America as well in the northern parts of South America, on the peaks huge palm trees deep in the rainforest. As the fruit ripens, it turns green to deep purple, they are round in shape from 1-1.5 cm diameter. The edible portion of the Acai berry is small because the stone is about 80% of their volume. Every tree comes out 3 to 4 stalks, with 3 on each stalk up to 6 kilograms of fruit. They are collected from July to December.

Although it has been the main ingredient of food for hundreds of years inhabitants of the Amazon and its health promoting properties for generations appreciated by the native Indians (Anomabi), it was not until 2000 that the first publications appeared research containing information about its high nutritional value and remarkable health-promoting properties. In difficult times when the Acai berry was there only source for the indigenous peoples of the Amazon food its nutritional value allowed it to survive, maintaining energy and vitality.

Ripe Acai fruit is a small dark purple berry, similar to the fruit of blueberries. According to the Encyclopedia A popular OWN berry is a type of fleshy fruit with a large number of seeds, e.g. tomato or blueberry – typical fruit shrubs. The Acai berry is unusual in that it has one pit and grows on a palm tree.

Acai berry is a delicate and short-lived raw material. After reaching harvest maturity, it falls quickly and it must be eaten immediately after harvest. The local population is the most common softens the edible fruit pulp by soaking in water to obtain a thick drink colors purple with a creamy texture, oily appearance and a characteristic intense flavor (pungent due to presence of tannins) and smell.

The nutritional value of Acai berry

So far, no raw material (fruit) has been found in the world, which in terms of value the nutritional value could compete with Acai berry. That’s why Perricone called it “superfood No. 1 ”, and due to the high pro-health potential is recognized by scientists as a super berry, also called “the secret of longevity”.

The Acai fruit is extremely rich compared to other fruits a source of nutrients and fiber (Tab. 1). It should also be emphasized its low water content, which in fresh fruit is only 60%. Interesting there are also proportions between the individual nutrients.

Table 1. Energy value and content of the selected of the nutrients in the acai berry

Mostly too high in calories (533.9 kcal / 100 g DM) of Acai fruit corresponds to fat, monounsaturated acids are predominant constituting 60.2% of all fatty acids. It is worth adding that the level of fatty acids in acai berry is similar to their amount in olive oil, the high (56.2%) content is noteworthy oleic acid. Polyunsaturated acids are 11.1%, with the highest proportion of linoleic acid – 12.5%. High in fatty acids significant content of soluble vitamins correlates in fats (A and E), although fruits are also rich in vitamins from group B and minerals (calcium, iron, potassium, magnesium, copper, chromium, zinc, manganese, selenium, molybdenum, iodine, boron), with calcium and iron predominating.

In terms of carbohydrate composition, Acai fruits are characterized by high content of dietary fiber, with a small amount of simple sugars represented by fructose, lactose, sucrose, glucose and maltose. blueberry Acai is distinguished by the presence in its chemical composition proteins (8.1 g / 100 g DM) with high biological value, containing all essential amino acids in the recommended proportions.

Acai berry is the richest source of antioxidant substances among the famous fruits. Characterizes not only have a very high content of these compounds, but also also their diversity. There are compounds present in its composition phenolic, including anthocyanins, as well as bioflavonoids and three phytosterols. The content of ß-sitosterol in Acai berries is about 0.44 mg / g bw, sigmasterol – 0.04 mg / g bw, and campesterol – 0.03 mg / g DM).

The total content of phenolic compounds in the Acai fruit is high, 328 mg / 100 g. Of the anthocyanins attention is higher than in other fruits the level of cyanidin and its derivatives, where it dominates cyanidin-3-glucoside (its content in the flesh is about 1040 mg / l), (Tab. 2).

Total antioxidant content in Acai it is 33 times higher than in red grapes or red wine. Antioxidant potential Acai berries is 1026 μmol TE / g (102,600 μmol TE / 100 g) ORAC units (Oxygen Radical Absorbent Capacity). This is the highest level of ORAC, ever found in a natural product (fruit). By comparison, the antioxidant potential cranberries and wild black springs, previously recognized as the highest is only 1/3 of the stated value for Acai fruit. It is worth adding that, according to some authors blueberry Acai contains over 50 as yet unidentified substances that are not found in other fruits.

Table 2. Content of anthocyanins and polyphenols in must
with Acai berry

The health-promoting properties of Acai berries

The Brazilians used the Acai fruit primarily for the treatment of gastroenteritis and skin diseases. In addition, Acai berries were served infants when their mothers could not feed them on their own breastfeeding.

Overall, the health benefits of consuming berries and its preserves (e.g. concentrate, supplement diets) there are many. They are related first with the high antioxidant potential of this berry, so the ability to “sweep” or neutralize free radicals. This includes braking, among other things oxidative cell destruction process caused by free radicals, as well as on the participation in activating and constantly renewing many antioxidants in our body that are damaged or inactivated. Active antioxidants found found in products made from Acai berries can therefore strengthen our antioxidant potential organism, and thus its immunity. It is believed because the appropriate level of compounds taken from the diet with antioxidant properties it stimulates processes immune and enhances defense capabilities the cell itself.

Epidemiological studies show a relationship between the incidence of ischemic disease heart and eating foods rich in flavonoids. It has been shown that the least amount of flavonoids in the diet (on average approx. 5 mg / day) is consumed by Finns, most of them by the Japanese (approx. 64 mg / day). The research conducted is the confirmation among the population of southern France and England and Wales. It has been shown that 5-fold lower mortality due to heart disease among the population of southern France than England is attributed to the greater consumption of vegetables and fruits rich in flavonoids, as well as red wine, especially rich in anthocyanins. It is believed that the action these compounds are more potent than other antioxidants present in food (vitamin C, E, carotenoids). Demonstrated incl. that flavonoids by inhibiting the activity phosphodiesterase and cyclooxygenase are more effective than aspirin reduce the aggregation of platelets and thus they are recommended in the prevention of atherosclerosis. It is also believed that plant polyphenols counteract the formation stomach and duodenal ulcers caused by stress, drugs and alcohol. Nutritionists recommend systematic consumption of plant polyphenols in the form of raw vegetables and fruit, in five portions of these products during the day, 1 portion is considered to be at least 80 g.

The Acai berry is believed to have properties inhibiting the growth of abnormal cells. On the one hand, high-activity antioxidants they inactivate free radicals before they can damage them DNA of our body’s cells. On the other hand, due to the protective effect on nuclear DNA and mitochondrial cells prevent cell mutations. Del Pozo-Insfran et al. showed in in vitro studies that the extract Acai berry destroys 35 to 86% of abnormal cells (depending on the type of extract and its concentration) inducing leukemia within a 24-hour experiment.

It is worth noting that the body’s “fight” for health takes place at the molecular (cellular) level. Tests showed that water-soluble antioxidants after getting into the cell, they not only inactivate free radicals, but also have other beneficial effects, starting with the destruction of Escherichia coli bacteria in the urinary system until efficiency increases the production of vitamin D in the skin when exposed to radiation solar panels. In the berries Acai are also found substances such as flavones, flavonoids and isoflavonoids, that destroy or inhibit the growth of bacteria and viruses.

It was found that antioxidants were present in the Acai fruit are absorbed very quickly into the bloodstream, can therefore benefit ours health incl. by regulating blood pressure. Acai oil contains active phytochemicals, including phytosteroids supporting the level regulation processes cholesterol in the blood. Acai concentrate inhibits the formation of cholesterol deposits, thanks to the cleansing the action of polyphenols. Many phytochemicals found in the Acai fruit prevents heart attacks heart, strengthens the heart muscle and the vascular walls blood vessels. Another beneficial property of Acai berry is to help regulate blood glucose levels. The research also showed that the Acai berry, for the sake of high contents of zeaxanthin and lutein, shows the effect protective eyesight, can also contribute to inhibiting eye corneal degeneration and cataracts.

The phenolic compounds in Agai juice are beneficial also on the digestive processes in the body. Polyphenols prevent peptic ulcer disease, reflux, support also the processes of removing toxins from the body.

The use of Acai berry

Due to the very high endogenous activity cellular enzymes after approximately 12 hours after harvesting, the berries deteriorate, hence they immediately deteriorate processes them.

Acai fruits are used in Brazil, including for the production juices (after dilution with water). Based on a berry Acai is a variety of products, including dietary supplements. Acai fruits arouse the interest of nutritionists, people on a slimming diet, practicing sports water (surfers) and SPA salon owners.

Products containing the Acai berry, with due to its extraordinary nutritional properties, they arrive to a growing group of recipients.

The scientifically documented link between diet and with human health he made production take up food enriched with antioxidants origin natural. In designing new products market and looking for the right components for functional purposes, food is essential plant origin. Many studies have shown that these foods, rich in substances with antioxidant properties, play an important role in prevention many civilization diseases, such as atherosclerosis, diabetes, cataracts, Parkinson’s disease, Alzheimer’s disease. Broadly speaking, antioxidants they include all kinds of inhibitory substances with oxygen or ozone, or acting indirectly by binding some pro-oxidants. These compounds are represented by polyphenols (incl phenolic acids, flavonoids, tannins), vitamins – A, C. and tocopherols, carotenoids, organic acids, selenium, phytates, thiocyanates and many more. Among the products plants with particularly high antioxidant activity the Acai fruits stand out. So far no a raw material (fruit) was found in the world, which under in terms of nutritional value would be comparable with Acai berry. Growing on one of the most fertile soils of the world, this fruit contains not only a wealth of antioxidants, but also balanced unsaturated complex fatty acids, amino acids, phytosterols, vitamins and many minerals. Limited literature data shows many benefits resulting from the consumption of blueberries Acai or drinking her juice. The most important of them are:

This berry can therefore represent extremely valuable an ingredient of functional foods or dietary supplements.

The above information is for information purposes only and has been compiled from the available information scientific publications. In case of health problems, please consult your doctor.